Managing flood and drought risks around the world better

A report published by the World Bank and Deltares, An EPIC Response: Innovative Governance for Flood and Drought Risk Management, sets out a new perspective on flood and drought risk management. Deltalife spoke to one of the authors: Greg Browder Global Lead for Water and Resilience at the World Bank. “We provide three essential conditions to manage flood and drought risks better,” he says.

Deltares and the World Bank are collaborating worldwide on projects for flood and drought risk management. As in Saint-Louis in Senegal, where the river and sea often cause flooding and coastal erosion.

Remedies are urgently needed: tens of thousands of people have died in the last decade due to floods and droughts. Billions of others have been affected: more than a billion US dollars in economic damage and increased geopolitical instability. Climate change means this challenge can only get more pressing. Storms and cloudbursts are getting more extreme and deadly, droughts are becoming more frequent, longer and more severe, and the affected areas are larger.

The authors hope the report, published on World Desertification and Drought Day on 17 June, will help governments improve their systems for the management of flood and drought risk to create a safer, more prosperous future for the world's population of 7.7 billion people. “A lot of progress has already been made in recent decades,” says Browder. “But we are lagging behind in terms of managing the negative impacts, which are increasing due to climate change, the growth of the world population and economic development, which means that more assets are at risk.”

The Mekong Delta is an important fertile area and is also known as the rice bowl of Southeast Asia. Land subsidence and salinisation represent threats to, among other things, rice cultivation. Work is taking place on a Mekong Delta Plan in collaboration with the Dutch government. Jointly with the University of Utrecht, local universities and the Vietnamese government, we are looking at ways to combat land subsidence and salinisation. For example by collecting water during wet periods, infiltrating it into the ground and extracting it again during dry periods.

Land subsidence and urbanisation strategies in the Mekong Delta

Involving all of society

The report states that there are three essential conditions that must be met in order to improve flood and drought risk management. Firstly, a ‘whole of society’ approach is needed that involves government agencies, including local governments, universities, businesses, civil society and the general public. “They can all have a major impact on mitigating disasters caused by flood and drought,” explains Browder.

He emphasises that people coping with social exclusion should be particularly involved. “Effective upland watersheds/catchments are important for flood and drought risk management – forests help to mitigate the effects of heavy rainfall. Elevated catchments are often home to ethnically marginalised communities. Governments should implement programmes that both support communities and protect elevated watersheds, for example by paying for environmental work, agroforestry or forest management.”

The authors believe that government agencies should invest more in communications and education about drought and flooding to inform the general public better and to develop multidisciplinary expertise. For example, a consortium of European universities has a Master's programme on flood risk management that unites the scientific, technical and socio-economic fields.

It would be a good thing if governments were to pay more attention to boosting public awareness of the risks of flooding and drought, thinks Browder. “Farmers can then make more informed decisions and the private sector will know where to invest their money. In addition, the general public will be able to make better decisions about where to buy a house and they will understand the need to save water.”

Governments could also involve the research community more. “We encourage the idea that you need science-informed policy and policy-informed science. There is an urgent need for more research in this area, which is something that research institutes like Deltares can do best.”

Greg Browder is the Lead Water Resources Management Specialist at the World Bank. During the writing of this report, he acted as the Global Lead for Water and Resilience. In his twenty years at the World Bank, Greg has been involved in large-scale water projects in East and South Asia, and in Latin America.

We encourage the idea that you need science-informed policy and policy-informed science.”

“As we were writing this report, we discovered that the crux was not really about too much or too little water but more about the impact a flood or drought has on the economy, society and the environment,” says Browder. The term ‘hydro-climatic events’ is already being used by scientists. According to the authors, it would be a good thing if policymakers were to start using the same language to make it clear that floods and droughts are extremes on the hydro-climatic spectrum because of the complex interactions between weather, watersheds and water.

Saint-Louis is located on the estuary of the Senegal River. During the wet season, high water levels in the river cause flooding. At the same time, the Senegalese city is near the coast, where storms and waves result in flooding and coastal erosion.

Deltares, working with the World Bank, has started to set up monitoring campaigns with the aim of designing models to predict the effects of waves and storms.

Drying up of the Aral Lake over the years, as visualised using Deltares Aquamonitor

A third condition for the improved management of flood and drought risks is good collaboration between the various agencies involved. The report presents the ‘EPIC Response Framework’ with a description of more than thirty programmes that play a role. Seven agencies that every government should have to manage risks can implement those programmes: disaster risk management, water resource management, meteorology, agriculture, natural resource management, social protection and financing.

“Although every government is organised differently, these principal functions remain the same,” explains Browder. “The authorities should not see themselves as independent actors but as part of a larger system. Otherwise, the hydro-climatic system will not work optimally.”

Four case studies on four continents show how hydro-climatic risk management is organised in practice. Browder points out that, even in the two high-income countries – the Netherlands and the United States – it took governments decades to get to where they are today. “There is still a lot that needs to be improved, such as collaboration between the different government bodies and competition between the agencies.”

The other two countries – Tanzania and the Philippines – are in the early stages of developing these systems. Both economic development and the quality of governance determine how well a country can manage its risks, explains Browder.

In the Indonesian cities of Bima, Manado and Pontianak, Deltares teamed up with other organisations to establish an integrated approach for flood risk management. Specifically targeting different types of floods, the approach modelled the risks and combined them with urban challenges for each of the three cities. This was done in close consultation with local, regional and national stakeholders.

Browder hopes this report will put flood and drought risk management at the top of the agenda for adaptation to climate change. “The different EPIC Response programmes implemented by a variety of agencies interact and ultimately determine the final social, economic, and environmental impacts caused by extreme hydro-climatic events.”

He believes the pandemic has shown us the importance of focusing on resilience in a the broad sense. “COVID‑19 has made it clear that many different, unexpected events can occur with major consequences. So we need to make our systems robust and adaptable. Of course, this also applies to hydro-climatic events.”

This report resulted from close collaboration between the World Bank and Deltares. Experts from the World Bank and Deltares have been working together on this study for more than a year. External experts also reviewed this report. They included: the World Meteorological Organization's Associated Program for Flood Management and Integrated Drought Management Program, the Secretariat to the United Nations Convention to Combat Desertification, ICHARM, the Dutch Environmental Research Agency (PBL) and the Universities of Dundee, Nebraska and Amsterdam. The report is based on case studies in the Netherlands, California, Tanzania and the Philippines, among others.

Understanding the coastal system is a constant challenge 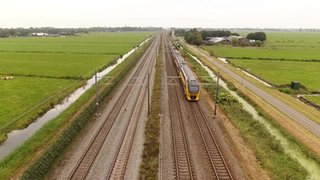 Reliable railways, now and in the future